Croatia Could Be 100% Supplied by Renewable Energy by 2050

As Croatia contemplates drilling in its pristine Adriatic Sea, a thought-provoking academic study from America places the country among 139 who could be 100% reliant on renewable energy by 2050.

Ahead of the UN Climate Change talks in Paris later this month, American academics Mark Jacobson and Mark Delucchi have produced a detailed study outlining how as many as 139 countries could be energy sufficient by relying 100% on renewable energies, including Croatia, reports the Scientific American on November 19, 2015.

The study, which will be taken by Jacobson to Paris for meetings with world leaders and their aides, details how each country can generate all the energy needed for homes, business, industry, transport, agriculture and everything else from wind, solar and water power technologies by 2050. The report produces outline figures for each country.

According to the report, the main sources of energy for Croatia would be solar panels (48.9%), onshore wind (30%) and hydroelectric (11.7%). Use of these technologies would also have a net positive in terms of employment, with some 21,457 permanent jobs in construction and 31,025 in operational jobs.

Health benefits are exemplified in deaths avoided, with some 1514 less people estimated to die due to air pollution, while the reliance of sustainable energy is projected to have a net annual energy saving cost of $437 per person by 2050, and $8,025 per person in annual energy, health and climate cost savings her person.

Reaction to the report has been mixed, from a transformational work to something a little more far-fetched, but it does bring the issue of renewable energy debate into the open once more, and at a time where Croatia's energy policy seems to be at a crossroads, particularly in the controversial area of Adriatic drilling for oil and gas. 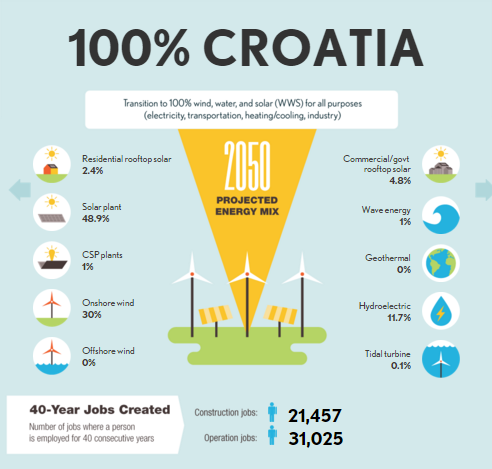 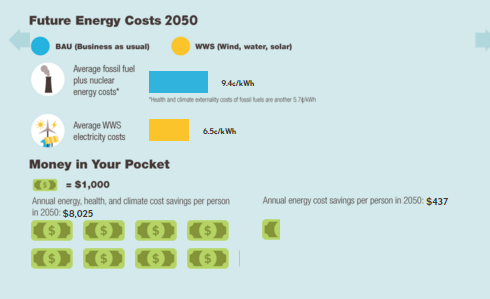 After what seemed like a seamless process to award tenders for drilling in the pristine Adriatic, an important source of tourism revenue for Croatia, two major oil companies pulled out of the process, returning their exploration licences. It is thought that a combination of low global oil prices and border disputes with Montenegro were to blame, and the ensuing political uncertainty (Croatia is yet to form a government two weeks after the November 8 election) makes the future of Adriatic drilling a little less certain. Indeed, oil industry writer John Mainwaring, writing for Rig Zone earlier this month, thinks that Croatia's moment may have passed:

"It seems that Croatia and other Balkan countries lying on the Adriatic may have missed their chance. Indeed, the Croatian government – along with the governments of Greece and Montenegro – has come in for criticism for its protracted bidding procedures. In an interview with Bloomberg last month, Mathios Rigas – CEO of Greece's sole upstream oil and gas company – was reported as saying that "bids cannot stay open forever", pointing out that if bidding rounds had been closed when oil was at $120 per barrel "they would have a lot more interest [in their offshore blocks] than they do today".